Hand-Arm Bimanual Intensive Therapy (HABIT) in children with hemiplegia is a new intervention developed at Columbia University. HABIT aims to improve the use and coordination of both arms in daily function. It involves intensive bimanual training. Like Constraint-Induced Therapy (CIT), it requires 90 hours of intensive therapy and it is performed in group settings with an emphasis of having fun. But unlike CIT, HABIT focuses on improving the ability to perform bimanual activities. The efficacy of this new bimanual treatment for improving coordination with two hands is being tested. To date, the results indicate good efficacy (Gordon et al. 2007; Gordon et al. 2008) and reinforce our belief that efficacy of hand rehabilitation is not dependent on the use of restrictive devices on the unaffected hand.

This work stems from prior work in our laboratory evaluating hand function in children with hemiplegic CP. We observed that bimanual coordination is more sequential and not as synchronized when compared to typically developing children (Hung, Charles & Gordon 2004; 2010).

CIT appears to be an effective treatment strategy for many individuals with CP. However, it may not necessarily be effective for children who have mild or severely impacted hand function. In addition, if the outcome of CIT is improved involved hand and arm use, this should involve not only greater efficiency in its use alone, but also increased use in bimanual activities. However, the transfer of skills learned in the intervention to functional activities requiring bimanual coordination is unclear. Furthermore, many clinicians have misinterpreted the work and believe the more restrictive the restraint, the better. There is no evidence to that effect, and in order to promote child-friendly treatment approaches while maintaining what we believe to be the important ingredient (practice intensity), considerable research is warranted before it can be marketed as an evidence-based rehabilitative strategy for children. Thus, we were compelled to evaluate whether children might benefit from intensive bimanual practice (HABIT) either alone or in conjunction with CIT. We currently have funding from the Thrasher Research Foundation to test this intervention, and to date have successfully tested it in more than 65 children. As of today, our work has demonstrated considerable promise and we received the 2007 Gayle G. Arnold Award for best scientific paper. Our latest results suggest similar efficacy for both treatment approaches along most clinical domains. However, HABIT seems to have an advantage in making progress on goals identified as important by children and caregivers. 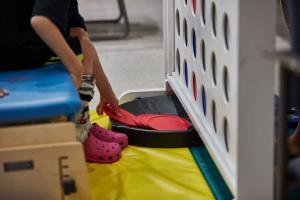 Children with unilateral cerebral palsy have hand function deficits as a result of early brain injury. There is an urgent need for effective hand therapies based on strong scientific evidence. This project brings together experts in the field of clinical neurorehabilitation, brain imaging, and biomedical engineering to test a novel therapy for children with cerebral palsy. This current project will examine skilled bimanual therapy paired with a Transcranial direct-current stimulation (tCDS) a non-invasive brain stimulation technique that has been shown to increase the rate at which individuals learn a motor task. The overall objective of this proposal is to determine how to optimally combine brain stimulation and motor training for rehabilitation. If successful, this novel approach could potentially reduce the time burden of intensive therapies. The results of this study will not only have important implications for rehabilitation in children with cerebral palsy, but could also contribute to understanding how to optimize rehabilitation of other neurological disorders, such as stroke and spinal cord injury.