The Winter Roundtable 2020 theme, TEACHING TO TRANSFORM, focused our attention on mentorship and supervision within the disciplines of psychology, education, and social work. The 2020 conference invited proposals that depict research, pedagogy, practice and activism that address this theme.

As in years past, we welcomed a conference in which students, scholars, practitioners, educators and community activists gather so as to share wisdom and resources.

Winter Roundtable Statement on the Death of George Floyd

We are anguished and outraged by the murder of George Floyd, whose death adds yet another name to the appalling list of innocent Black and Brown people killed by police in the United States. Our hearts are with George Floyd's family, friends, and Minneapolis community, for we recognize the traumatic effect of his death on those who loved him. Our hearts are also with our Black, Indigenous, and People of Color (BIPOC) communities, who continue to be traumatized by and suffer under white supremacy. For 37 years, the Winter Roundtable has worked to support the efforts of scholars, practitioners and activists in the cause of anti-racism and social justice; now, more than ever, the Roundtable family must continue to lead that cause in the disciplines of psychology and education. As we prepare for our 38th conference, as a community we are called together in collective action and healing--please join us.

Registration for the 2021 Winter Roundtable is not yet open.

We will open up volunteering opportunities in December, 2020. Please contact us then if you are interested in volunteering. 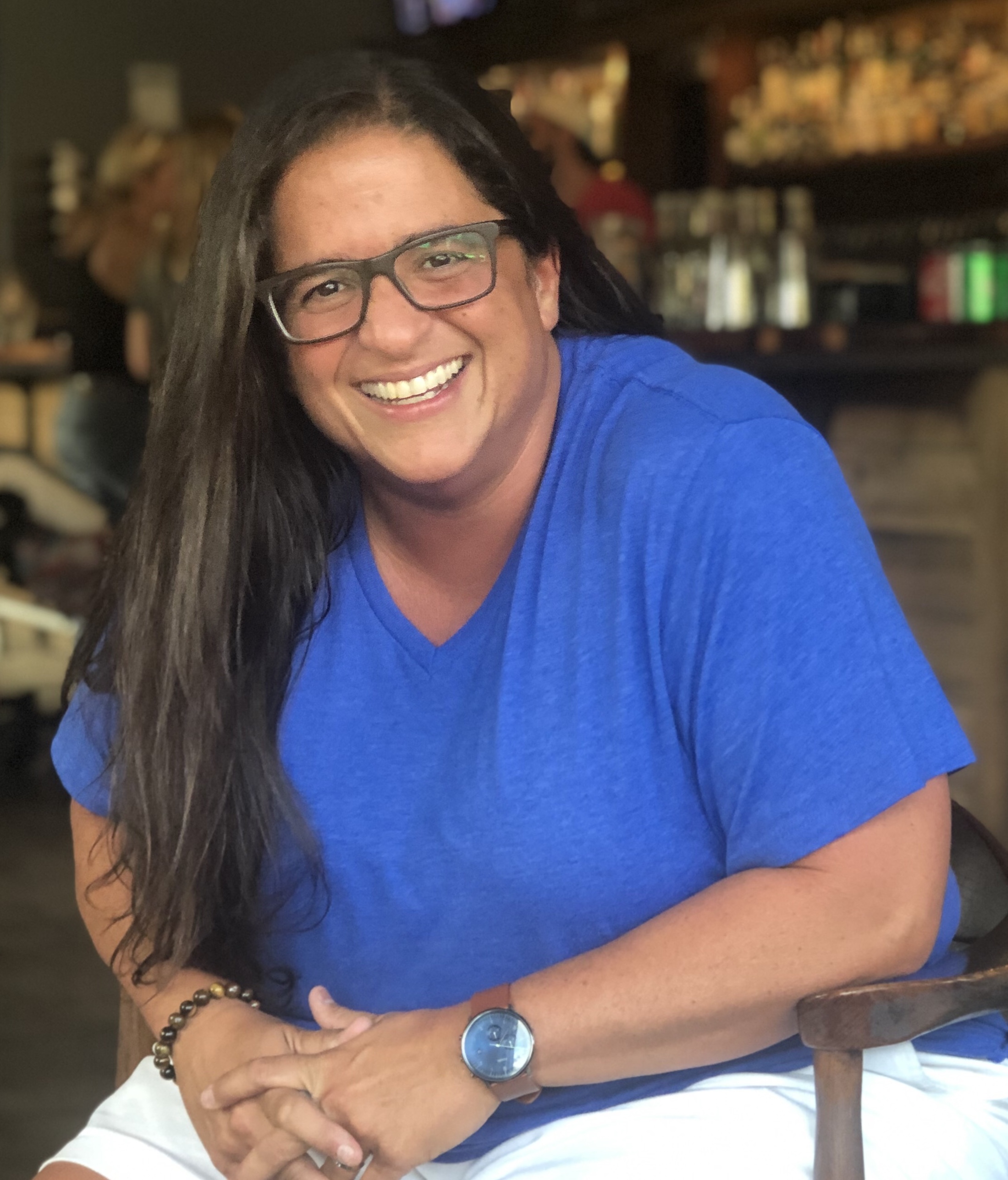 Dr. Cruz is a bilingual Licensed Psychologist and Diversity/Social Justice Consultant in the Denton/Dallas/Fort Worth area. She is currently Associate Director and Director of Training at Texas Woman’s University Counseling & Psychological Services. Additionally, she provides private consultation and trainings for institutions, businesses, and individuals who aim to improve their perspectives and inclusion within their organizations. Dr. Cruz completed her undergraduate studies in Psychology and Criminal Justice at Florida International University in Miami, Florida and received her doctoral degree from the Center for Psychological Studies at Nova Southeastern University in Fort Lauderdale, Florida. She is a diversity and gender specialist, with particular specialty in LGBTQ populations and racial/ethnic minorities. Dr. Cruz’s professional interests include social justice training, teaching/mentorship, the psychology of gender, identity issues, multicultural psychology, cultural/spiritual development, existential theory and the impact of the stigma of psychotherapy. 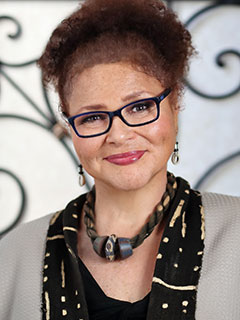 MacArthur Award winner Lisa Delpit is the recently retired Felton G. Clark Professor of Education at Southern University in Baton Rouge, Louisiana. The author of Other People’s Children and “Multiplication Is for White People,” and co-editor (with Joanne Kilgour Dowdy) of The Skin That We Speak (all published by The New Press), she lives in Baton Rouge, Louisiana. Dr. Delpit is editor of a new work, "Teaching When the World Is on Fire," which speaks to the contentious world today and the necessary conversations we all must have about it. 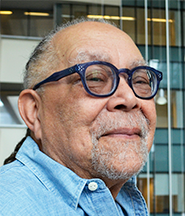 Sam Johnson, PhD, is a former chair of the Psychology Department at Baruch College, a counseling psychologist, and professor of Psychology. He sits on the President's Cabinet as the chair of the Baruch College Faculty Senate. His research and teaching interests are in culturally competent clinical training and applied psychological training for intercultural competence. His academic career spans over 40 years of service at many institutions, most recently at Teachers College Columbia University. While at Teachers College, Dr. Johnson pioneered multicultural curriculum development for professional psychologists at Columbia University. He is the founder of the Teachers College Winter Roundtable on Cross-Cultural Psychology and Education, the longest-running professional conference devoted to issues of diversity.

Here are some of our keynote speakers and their presentations at past Winter Roundtable Conferences.

The National Board for Certified Counselors (NBCC)

To obtain APA or NBCC credits for all approved CE courses at the Winter Roundtable, register with the additional $25 fee.

To obtain SW or LMHC credits, please register with the additional fee.

*For information on which presentations are SW eligible, please see our Agenda or contact the Winter Roundtable Office for more information. 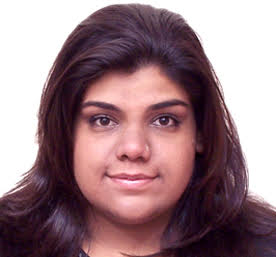 Riddhi Sandil, PhD is an Assistant Professor of Practice and Program Coordinator of the Ed.M. Program in Psychological Counseling at Teachers College, Columbia University. Dr. Sandil received her Ph.D. in Counseling Psychology from the University of Iowa in 2008 and has been continually licensed as a Psychologist since 2009. Dr. Sandil's scholarly interests are influenced by multiculturalism and social advocacy. Her research and clinical interests include minority stress, LGBTQ issues in counseling, counseling expectations of South Asian populations and complex trauma and its impact on women's well being. Additionally, Dr. Sandil serves on the boards of the Association of Women, Masters in Psychology and Counseling Accreditation Council, and is the co-found of the Sexuality, Women and Gender Project.

As Co-Director of the Winter Roundtable, Dr. Sandil is excited to continue with the social justice commitment of the field of Counseling Psychology! 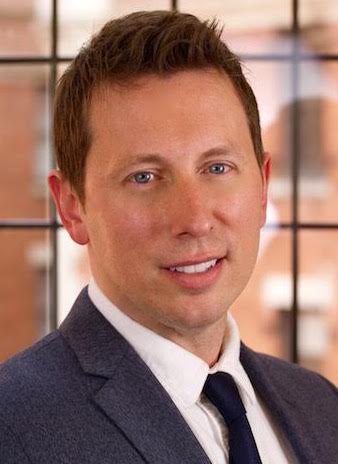 As Co-Director of the Winter Roundtable, Dr. Payton is excited to connect scholars, practitioners and students in the fields of education and psychology while advancing the values of multicultural competency and social justice. 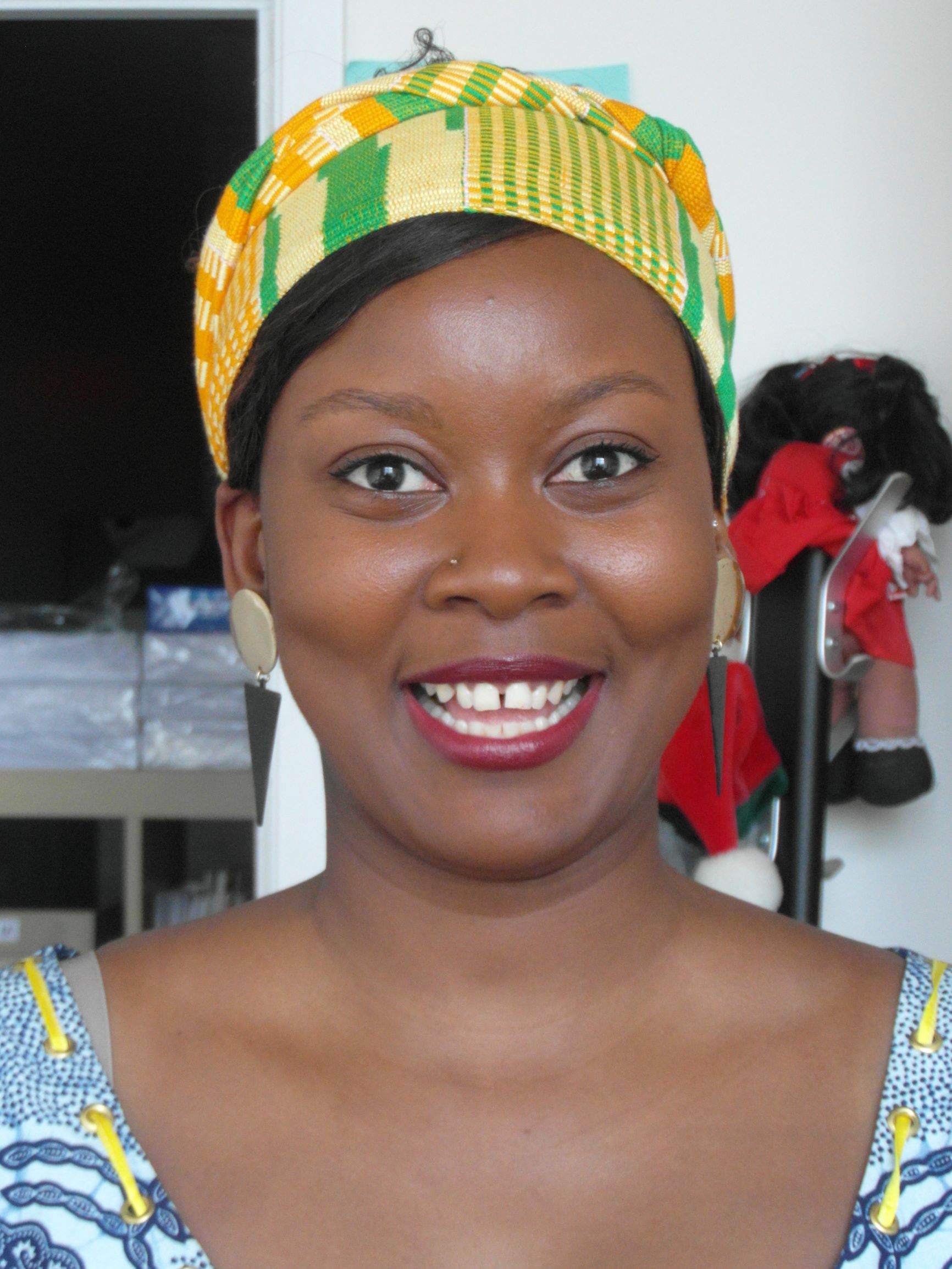 She is an African feminist, anti-violence advocate, community educator, and equity and social justice advocate. She completed her undergraduate degree double majoring in Global Studies and Women Studies and further pursued her Social Services Worker program, graduating with honors and becoming a registered social service worker with the Ontario College of Social Service Workers and Social Workers. Charlene is a lifelong learner, and with a decade of experience working with multiple community groups in the Greater Toronto Area on the impact of violence in the community and with survivors of violence and marginalized and vulnerable population groups has allowed her to further explore the ways in which education and the arts is a transformative tool and means of social justice making.

As a co-coordinator of the Winter Roundtable, Charlene is excited to be a part of a scholarly platform that brings together a community of learners and educators in discussing, sharing and learning from each other while simultaneously encouraging each other in the various ways in which we continue to RISE UP in working towards systemic and social change. 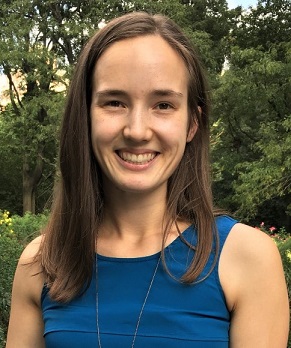 Anna Motulsky graduated from Whitman College in 2015 with a major in Biology and minors in Chinese and Chemistry. She then worked in Seattle as a clinical education course manager for two years, working closely with families and patients working to make a difference in future care practices by telling their stories. Anna now works as a medical scribe in the emergency department in NYC, and is passionate about the illness narratives and care of those aging as queer individuals.
As Co-Coordinator of the 2019 Winter Roundtable, Anna is excited to support the ongoing work of the roundtable in connecting and inspiring students and researchers to investigate new and evolving areas of social change.

The Race, Identity, and Liberation Conference

From Newark Airport, there is New Jersey Transit bus service to the Port Authority Bus Terminal.

The Henry Hudson Parkway (West Side Highway) in New York City runs parallel to the Hudson River and offers convenient access to Teachers College. The highway can be reached from most of the main routes entering New York City. The nearest major highway link to it is Interstate Highway 95 (I-95).

Whether driving north or south on the Henry Hudson Parkway/West Side Highway, exit at 95th Street. At the first traffic light, turn north (left) onto Riverside Drive; at 120th Street turn east (right) and go two blocks east to the College. The main entrance is located midway between Broadway and Amsterdam Avenue, on the north side of West 120th Street.

Parking
While West 120th Street offers metered parking on both sides of the street, parking on New York City streets in the Columbia University area is limited.
Nearby off-street parking facilities include:
(Please call garages directly for current prices and reservations)

The subway station serving Teachers College is the 116th Street stop of the IRT Broadway-Seventh Avenue local. The No. 1 subway train (red line) are local trains serving this station. Be sure that you are on (or transfer to) the local line at the 96th Street Station. The express line (No. 2 or No. 3 trains) does not serve Columbia University.

Information on current and historical operations.

You may book a hotel and learn more about visiting Teachers College at Columbia University by visiting the Travel Portal. If you have any questions please contact us via email. 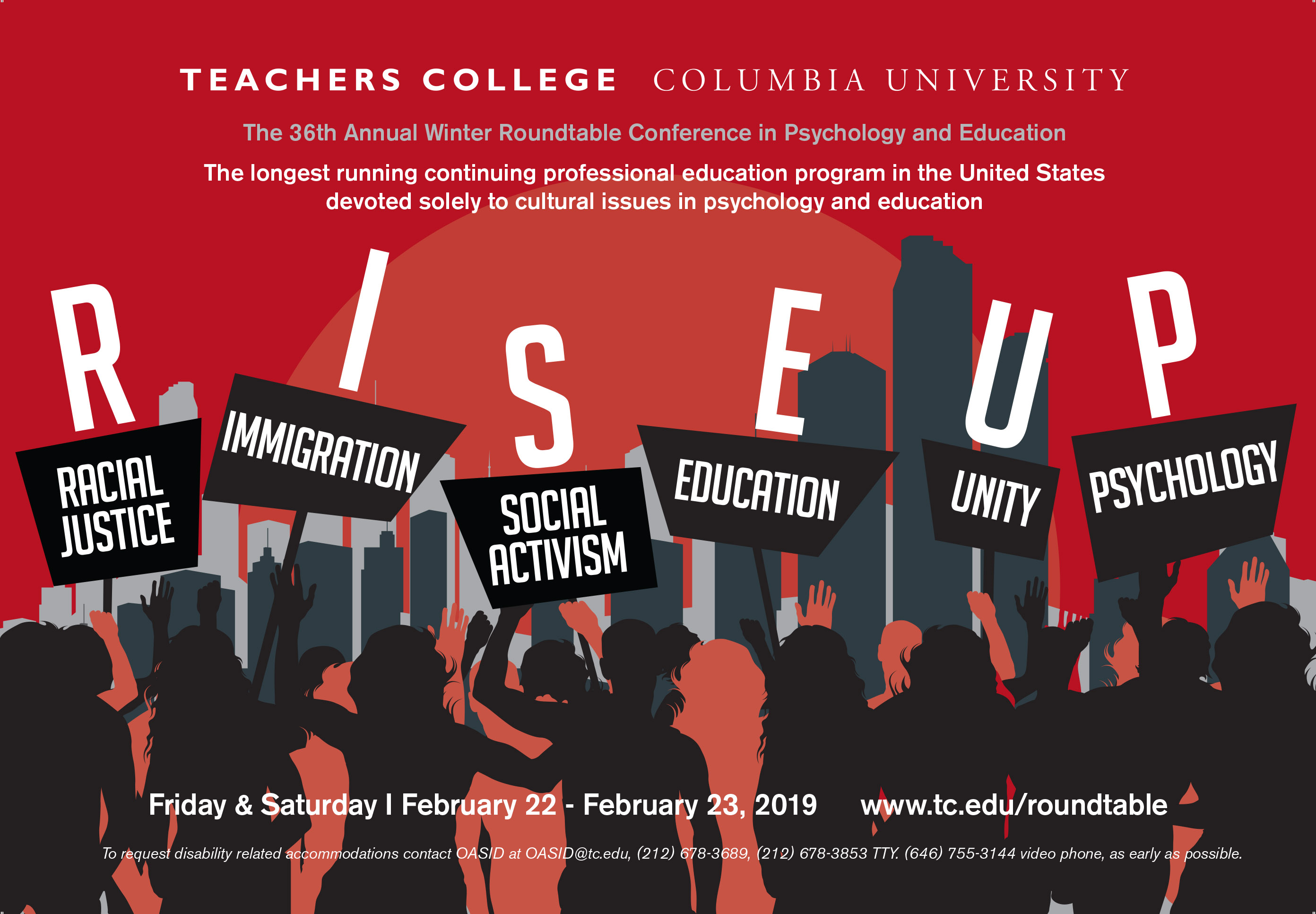 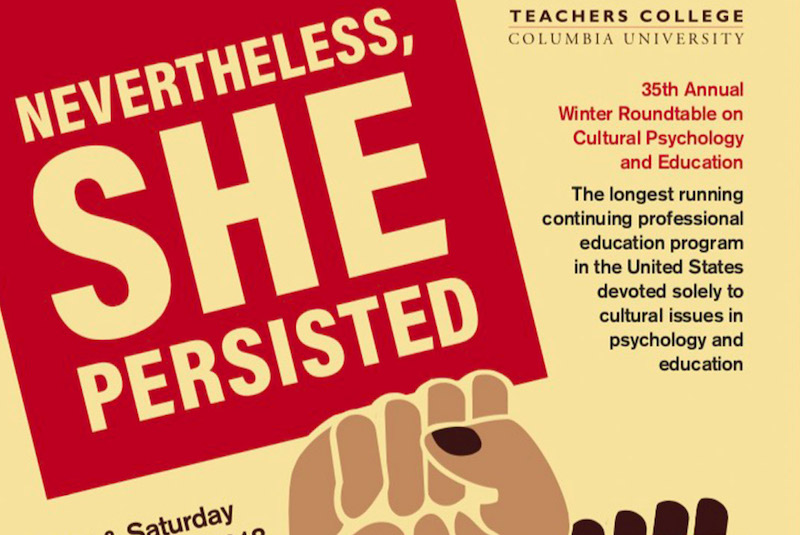 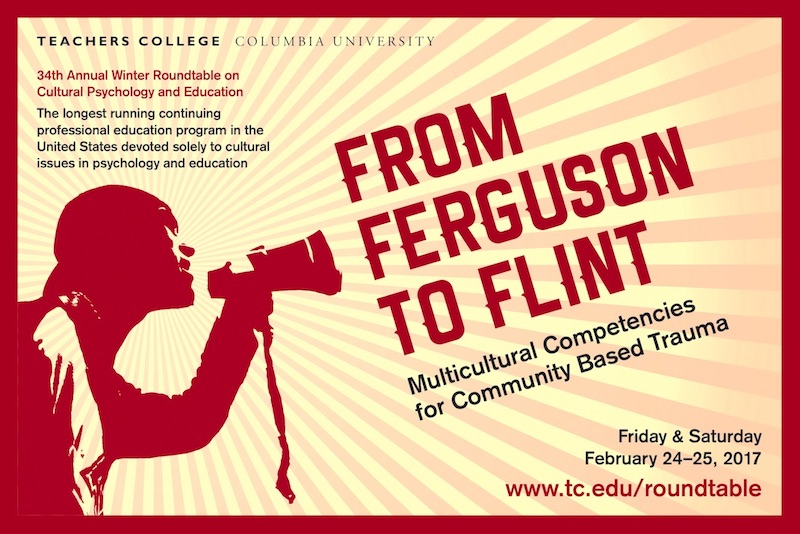 From Ferguson to Flint 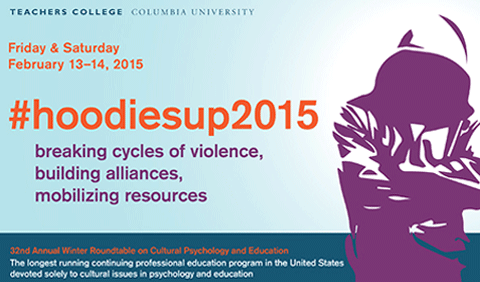 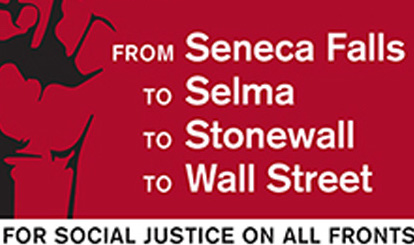 From Seneca Falls to Selma to Stonewall to Wall Street

We are happy to announce that recordings of selected presentations from past Winter Roundtables are now available for purchase or subscription!

To build excitement for the upcoming 2019 conference, we are now offering all of the available videos from past Winter Roundtable conferences through 2017 at a tremendous discount!

Selected presentations from 2012 through 2017 are available in both hard copy DVD format and as digital files which can be streamed or downloaded.

Selected presentations from 2006 through 2011 are available in DVD format only.

The digital files are available through the "Streaming or Download"link below.  Right now, a 1-year streaming subscription is just $35.00 per presentation!  Or you can purchase and download the digital file for just $50.00!

DVD copies are available through the "Purchase DVDs" link below.  Right now, a DVD copy of any available presentation is just $50.00!

To see short preview segments from each of the available videos, click the "Streaming or Download" link below.

Selected presentations from past Winter Roundtables are now available for streaming!

Selected presentations from past Winter Roundtables are now available for purchase!

Purchase DVD's
Back to skip to quick links