The Dean's office invited the TC community to talk about race, culture and diversity over lunch with Dr. Ernst Washington, Professor of the School of Education, University of Massachusetts, Amherst in mid October. 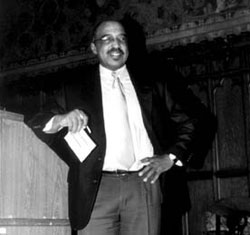 Consultant Ernie Washington of Massachusetts University at Amherst hosted a Town Hall Meeting for the Teachers College community on November 2. Washington, who is paving the way for the incoming Assistant Vice President for Diversity Janice Robinson, related information gleaned from his discussions with members of the unions. Issues he covered in his comments included the need for better and more widespread communication, reviving the family-friendly atmosphere that was once pervasive at the College, and general matters of civility-respect, recognition and acknowledgment-among the members of the community.