What can an urban New Jersey school learn from a Japanese school located in an upscale Connecticut community? According to Teachers College professor in Human Development, Clea Fernandez, it could learn how to reinvent its school. 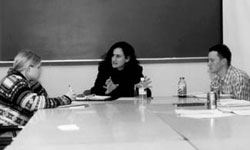