Makeeba McCreary: Making a Commitment to Young Girls of Color through Girlsworld

Makeeba McCreary is a doctoral student TC in Educational Administration. She is also the Director of GirlsWorld, a non-profit organization that helps young women of color in urban Boston to "envision and successfully pursue choices that lead to productive, positive adulthood." 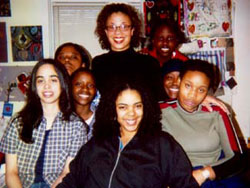