A cabaret-inspired evening of food, drink, artwork displays and musical entertainment was provided as a thank you to members of the Teachers College John Dewey Circle, those who give $1,000 or more to the TC Annual Fund. Held at Casa Italiana, the reception brought together donors to the Fund and some of the Dewey scholars who benefit from their generosity. 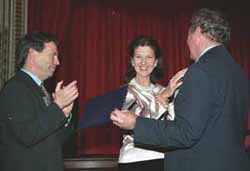