Children in the United States are hungry. Some are homeless. Some are being abused. There are 12 million of them that need our help-even more now than they did before, said Marian Wright Edelman, TC's seventh Virginia and Leonard Marx lecturer. 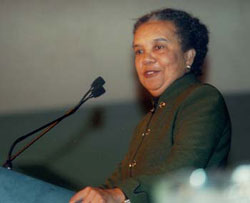