As many as 150 TC community members participated in a massive march and rally in New York City to protest what they perceive to be a rush to war with Iraq. 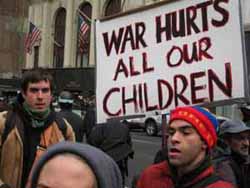 Protesters at the Anti-War Rally in Manhattan.