If a sudden disaster were to occur, from another terrorist attack to a burst pipe causing a flood, how would Teachers College fare in keeping the business of the College running? 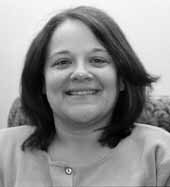