Students and researchers in the Department of Biobehavioral Sciences can start to plan new types of studies soon, once a new high-density electroencephalographic (EEG) system arrives. The EEG system uses up to 256 scalp electrodes to study the time-course and localization of neural activity associated cognitive function. In other words, through the use of this equipment, not only will researchers be able to measure brain activity, but will also be able to do mathematical calculations to determine from where in the brain the activity is coming. 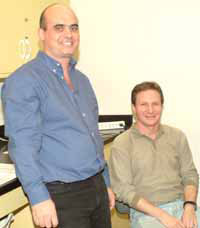