Junn Probes Link Between Education and Democracy in Sussman Lecture

Sussman Visiting Professor Jane Junn advanced a contrarian view in this year’s Sussman Lecture. Titling her remarks, “What Good Is Education for Democracy?” she invited the audience to suspend their disbelief and consider the possibility “that education might not always be the best thing for democracy.” 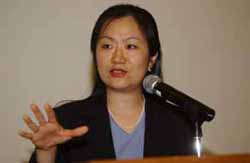