In this time of severe educational budget cuts, school superintendents nationwide are looking for answers on how best to lead their districts. From July 13th to 16th, a group of approximately 50 school superintendents from across the country and two from schools in Thailand and Hungary met at Teachers College to strengthen their roles as leaders. 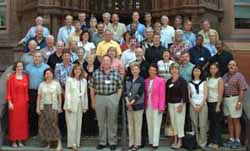