Gary N. Siperstein, founder and director of the Center for Social Development and Education, presented the 2004 Leonard and Frances Blackman Lecture in April. His talk, titled “A Cognitive Model for Understanding the Social Behavior of Children with Mental Retardation: A Springboard to Social Skills Instruction,” was presented in a conversational but heartfelt manner, outlining research that could affect the lives of millions of children and their families. 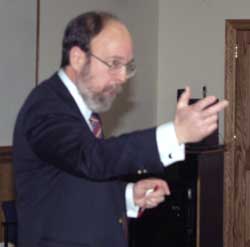