Since 1998, the Teachers College New Teacher Academy (NTA) has been working with some of the hardest-hit schools, dramatically increasing new teacher retention. 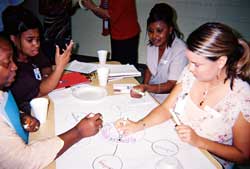 Teachers participating in an NTA workshop, which are designed to help retain new teachers in public schools in NYC and across the country.