On April 2nd, an opening reception was held in Macy Gallery for the exhibition “Synthetic Pleasures: Cybernetic Relationships in Studio Art Practice,” which was on display through April 23rd. 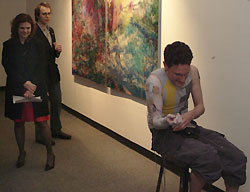 Visual arts researcher Sherry Mayo, left, looks on as performance artist Ben Margolis is remotely caressed by partnet Jenny Torino, who is sitting in another room with a remote control attached to the electrodes on Margolis' arm.