Bringing together scholarship students and the benefactors who make their education possible can inspire both groups, but in many cases such meetings never happen. 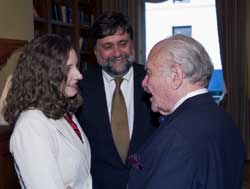