Teachers College Conference Re-Imagines a Multilingual World. The goals of the conference, which brought together research findings on multilingual schooling from across the globe, were twofold: to promote recognition and respect for traditional minority and indigenous languages; and-in the words of Professor Elana Shohamy of Tel Aviv University-to find ways of overcoming the social, political and educational obstacles that undermine "the imagined." 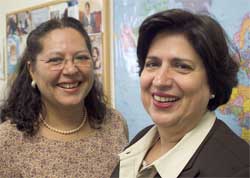