The Next Big Thing

TC has strengthened its faculty and its administration, refurbished its campus and raised $155 million. Now it's time for some serious change. 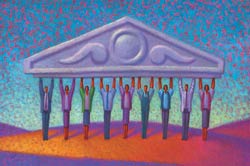