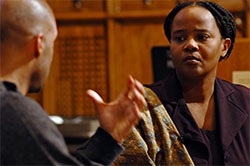 Author Edwidge Danticat with Project Citizen host Kelvin Sealy. Danticat comes to writing through "a desire to tell the story to myself."