Diversity Is the Theme at AERA | Teachers College Columbia University

Diversity Is the Theme at AERA

It’s the world’s foremost gathering of education researchers (12,000 from 53 countries), and its theme this year was “Demography and Democracy in the Era of Accountability.” So it’s not surprising that the 2005 annual meeting of the American Educational Research Association (AERA), held in Montreal in early April, drew more than 162 presenters, panel participants and session chairs from Teachers College alone. 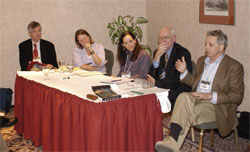