The End of an Era | Teachers College Columbia University

The End of an Era

Arthur Levine had much to report in his annual State of the College address on September 14, but he saved the biggest news for last: he will step down as the Colleges President on July 1, 2006. His departure will cap a 12-year run during which the College tripled its endowment; refurbished and rehabilitated its physical plant; reorganized its academic departments and strengthened its faculty and Board of Trustees; conducted the largest capital campaign ever undertaken by a graduate school of education; and adopted a new mission focused on educational equity. 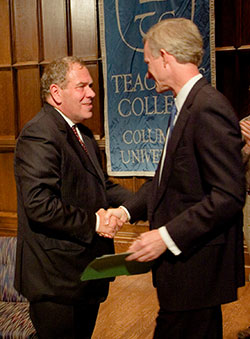 President Levine greets Board Co-chair Bill Reuckert after announcing he will step down in July 2006.