Down in Duplicating, One of a Kind | Teachers College Columbia University

Down in Duplicating, One of a Kind

Rocky Schwarz, Manager of Document Services, can tell you which countries have blue and white flags. He knows plenty about British royalty, geography and 60s rock trivia-'"all of which has helped make him the crossword champion he is. But his real passion is the volunteer work he does to help educate disadvantaged children in Liberia. 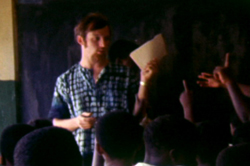