In New Mexico where Elvira Bitsoi Largie grew up and which she still calls home, the most important part of her life as a Navajo woman - and as a member of her Kinyaa'aanii clan - is "rising early and being in harmony with Mother Earth and Father Sky and the natural forces of the world: earth, wind, fire and water." 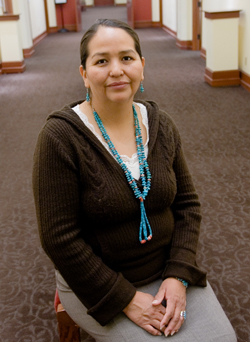