Isaac Brooks reads from his story at the Book Talk event for Forever After: New York City Teachers on 9/11. 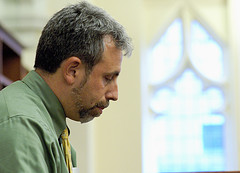