Building Oz in the Projects

Ira Weston, Principal of Paul Robeson High School for Business and Technology on Albany Avenue in Brooklyn, sees his glass as half full. While "at risk" might be the term others would use to describe the 1,500 primarily African American students who attend Robeson - a forbidding-looking fortress of a building in one of the City's poorest neighborhoods - Weston prefers to call them "at promise." _ "It's just a way you define your own reality," he says. "I would rather be a principal of a school with 1,500 'at promise' students than 1,500 'at risk' students. I look for the good in kids. I look for the majesty and talent rather than the deficits." 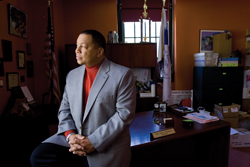