The elephant in the room. It's the image for a bad situation that's being ignored. But for a small group of students and alumni from Teachers College and Columbia University who visited New Orleans early in 2006, it may have been forever eclipsed by the sight of a 180-ton barge sitting in the middle of a street in the city's abandoned Ninth Ward. 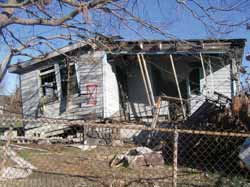 A ruined house in the Noew Orleans' Devastated Ninth Ward