Writing the Book on Language

After 40 years of teaching kids to speak, Doug Greer has some new numbers that help validate his work. He's also got a new book that lays out his methodology. 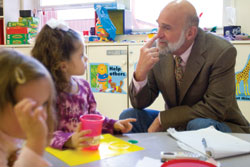