Learning What It Means to Lead | Teachers College Columbia University

Learning What It Means to Lead

As President of TC's Student Senate, Michelle Cammarata wants to increase student participating in addressing issues of TC's daily life. As an org psych student, she ponders new ways leaders can act to create benefits for all. A racist incident on TC's campus has meant a baptism by fire Cammarata on both fronts. 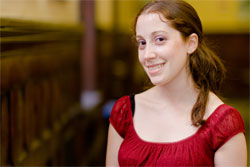