A Preview from Obama's Nominee for U.S. Education Secretary

Arne Duncan still shoots hoops with a longtime friend. That friend recently was elected President of the United States, and in a speech given at TC some weeks ago, Duncan -- now the nominee to become U.S. Secretary of Education -- said he's confident the new president won't let the current economic crisis deter him from fixing the nation's schools. 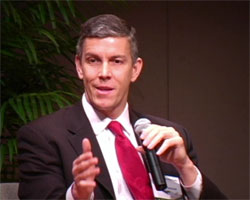 Arne Duncan at the Equity Symposium 2008