President Susan Fuhrman has signed a letter of intent to work with the Caribbean country in its efforts to revamp its educational system. 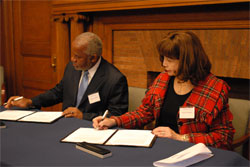