"If there is a single thread that links the full breadth of our activities at TC, it is the notion of serving as education partners to the world -- locally, nationally and internationally."

With those words, TC President Susan Fuhrman established partnership as the theme for the College's 2008 commencement exercises, held over the course of two cool and rainy days on May 20th and 21st at Riverside Church. More than 1,900 master's and doctoral students, hailing from 57 nations, 38 American states, the District of Columbia and Puerto Rico, participated in the three ceremonies. Their interests and stories were hugely diverse, Fuhrman said, but in her view, the graduates had all originally come to TC "because you wanted to engage the world -- and even more important, because you wanted to change it." 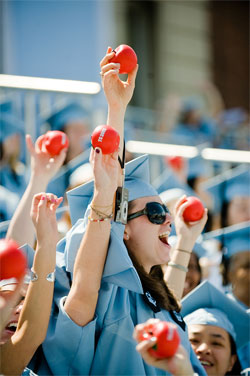