Contrary to expectations -- and the fears of many parents -- Muslim youth have generally felt comfortable, safe and fairly content in New York City public schools since the events of September 11th, 2001, according to a new study conducted by researchers at Teachers College. Yet these young people -- even those who are not religious -- have been made hyper-conscious of their religious identity See Preliminary Findings. 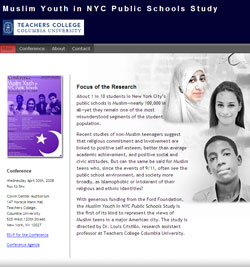 Through a combination of phone interviews, focus groups, and ethnographic fieldwork, The Muslim Youth in NYC Public Schools Study explores the intersection of religious and civic identities.