A Patron of TC Art

Funding from foundations established by alumnus Colonel Eugene Myers has had a tangible influence on the College's art scene. 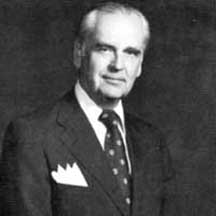