Exploring a World of Ideas

Longtime journalist John Merrow keynotes a full day of events at an academic festival for TC alumni, students and friends that featured presentations by a stellar lineup of TC faculty on a wide range of topics. 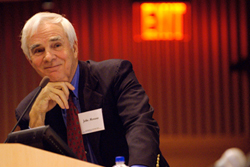