How to Educate a Workforce on the Move

For China's massive migrant worker population, community colleges may be the best hope for obtaining an education. 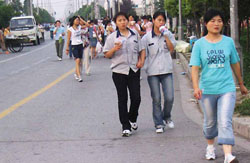 En route to education: Migrant workers walk to an experimental learning center in an industrial park on the outskirts of Shanghai.