Getting a Reading on High Literacy in Cuba

Cuba is fascinating for its clear educational successes in the midst of socioeconomic difficulties. 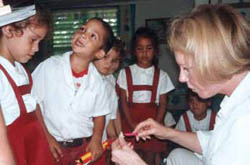