Alumna to Serve as Chancellor of NYS Board of Regents

Merryl Tisch, who earned a doctorate at TC, will be the first woman to hold the position on the panel that sets policy for the state's educational system. 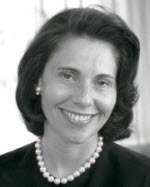