Can after-school programs help narrow the achievement gap? Professor Jeanne Brooks-Gunn and her colleagues at TC have found that they can-'"but not by much
also noted that low-income youth face some barriers to participating in after-school programs that don’t affect their more affluent counterparts, including an inability to afford fees, poor access to safe transportation and conflicting obligations, such having to take care of younger siblings.
Yet a few studies have shown, Roth said, that at-risk students who participate at high levels in after-school programs benefit academically, and those more so than their middle class peers. At the same time, it appears that academically at-risk youths require higher and more intense levels of participation to reap the benefits of after-school programs.
Given that, said that efforts to get disadvantaged youths to participate in after-school programs at higher rates is a good idea, but cautioned that such programs “are best viewed as part of a multifaceted approach to narrowing the achievement gap.”
Granger questioned the need for more programs to reach greater numbers of students. For him, the reality is that many programs already in place are, at best, mediocre—dull and uninspired.
“I’m not necessarily convinced that taking care of younger kids is a bad thing for the older kids,” Granger said. “Sometimes it is, and sometimes it isn’t. Family chores and that sort of stuff sometimes help families function better. I am not so sure that the correct policy response is, ‘Let’s get those kids out of the house and into the center.’”
Instead, he argued that the focus should be on determining why some programs are effective and others are not. He called for a shift away from asking whether after-school programs make a difference in terms of academic achievement to probing the differences between programs that are highly effective and those that aren’t—and finding ways to help less successful programs become high-performing ones.
Friedman asked whether the focus should be limited to traditional academic outcomes such as test scores and grades when evaluating the effectiveness of after-school programs. School attendance rates, which were not considered in the research report, can be as robust an indicator—if not more so—of the success of an after-school program than test scores, she said.
“I think attendance in the school day really goes to, in many ways, what after-school programs seek to do, which is create tighter bonds with schools and make kids feel better when they are in school. I guess why I am so much in favor at looking at school-day attendance instead of test scores is because, one, it’s a lot cheaper to collect than other sets of data and, two, school day attendance is a strong marker of school attachment and graduation rates.”
Brooks-Gunn highlighted a series of policy and research recommendations, including reducing some of the barriers that disadvantaged students face by providing transportation to and from school and taking a more “family approach” in which younger as well as older siblings can attend a program.
She also called for finding ways to provide after-school programs with funding that can be sustained for longer periods. Currently, the $1 billion 21st Century Community Learning Centers, the only federal program designed for after-school programs, limits grant funding to five years, she said.
“This is not exactly the way to get sustainable programs in the field,” she said. “We need examples of the kinds of things we need to do so that programs aren’t coming and going.”
Research Recommendations
1. More Research on the Root Causes of Low Participation Rates among Disadvantaged Youth
2. More Research on Differences in Program Quality for More versus Less Advantaged Youth
3. More Experimental Research on the Academic Implications of “Evidence-Based” After-School Programs for
Disadvantaged Youth
4. Research on Methods of Improving the Quality of After-School Programs that Serve Disadvantaged Youth
5. More Research on Differences in the Benefits of Participation across Socioeconomic Strata
Recommendations for Policy and Policy Research
1. Align Funding Priorities with Measures that Will Truly Improve Access to Programs
2. Align Funding Priorities with Measures that Will Truly Improve Program Quality
3. Ensure that Public Funding Mechanisms Facilitate Program Sustainability
The Equity in Education Forum Series at Teachers College seeks to promote education equity by highlighting important new research emerging from The Campaign for Educational Equity’s Research Initiative and by fostering dialogue on important equity issues affecting schools today. All forums are open to the TC and community and to the general public. 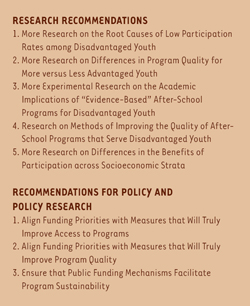 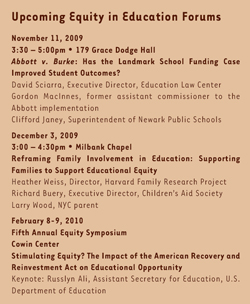 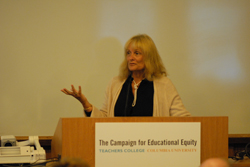