The Passing of an Education Giant | Teachers College Columbia University

The Passing of an Education Giant

Education reformer Theodore Sizer - founder of the Coalition of Essential Schools and author of Horace's Compromise -- died at 77 on October 21st. Sizer - former chair of TC's President's Advisory Council, and past recipient (with his wife, Nancy Sizer) of the Klingenstein Leadership Award from TC's Klingenstein Center for Independent School Leadership - gave his own account of his career in Those Who Dared: Five Visionaries Who Changed American Education, published by Teachers College Press in 2008. 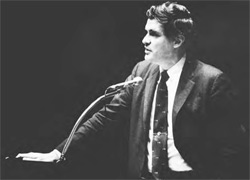