Equity Symposium Asks: Where Is $100 Billion in Education Aid Going?

The federal government is showering states with $100 billion in aid to schools. This year's Equity Symposium, February 8 and 9, examines whether that money is going toward improving schools for poor children. 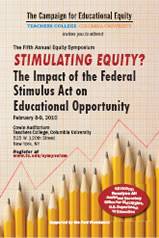