TC's Charles Basch details the impact of seven educationally relevant health disparities - and how they affect students' school performance. Click here to see the video of Basch, Matt Yale of the U.S. Department of Education, Howell Wechsler of the U.S. Centers for Disease Control and Prevention, and Jane Quinn of the Children's Aid Society. Click here to access a study by Basch on this subject, and click here for summary slides of the study. 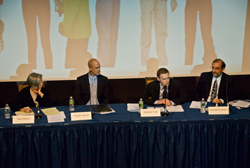