How do funds address educational inequities?
In order to spend the funds quickly, states expanded the number of students who qualified for low-income assistance in programs such as Title I. According to research presented at the symposium, once the federal money runs out, states may not be able to maintain services to those extra students. “The federal government is promising reforms way beyond what it’s capable of carrying out,” said Maris S. Vinovskis, Professor of Public Policy at the Gerald R. Ford School of Public Policy at the , who gave a paper on the growing influence of the federal government on local school districts.
Rebell, an attorney who successfully sued New York State on behalf of New York City plaintiffs in an educational equity lawsuit, said states’ inattention to the education of poor students violates their constitutional rights, which should be protected in good economic times as well as bad. “Constitutional rights are not conditional and do not evaporate during times of recession,” he wrote in another paper on the constitutional implications of the bailout program, presented at the symposium. “Children’s need for meaningful educational opportunity cannot, therefore, be deferred because tax receipts are lagging.”
Keynote addresses were delivered by Governor Edward G. Rendell of Pennsylvania (who spoke live via video conferencing), who has kept funding educational equity provisions in his state as scheduled, despite the current economic downturn, and Russlynn Ali, Assistant Secretary for Civil Rights, U.S. Department of Education, who is responsible for enforcing civil rights law in schools.
The symposium also included a panel discussion on and , including Daniel Lowengard, Superintendent of Syracuse schools, and Mary Anne Schmitt-Carey, President of Say Yes to Education in . A panel of national educational equity experts included Joseph Martin, Executive Director, Consortium for Adequate School Funding in Georgia; Timothy Mitchell, Superintendent of Schools, Chamberlain, South Dakota; and Candace Cortiella, Founder and Director, Advocacy Institute. Mitchell Chester, Commissioner of Elementary and Secondary Education for the State of , participated with in a discussion about maintaining educational opportunity in hard times.
To view video and papers from the conference, visit www.tc.edu/symposium/ . 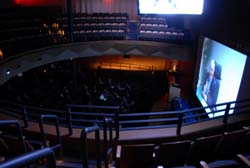 Jack jenning, head of the Center for Education Policy, with Jessica Wolff, Policy Director for the Campaign for Educational Equity. 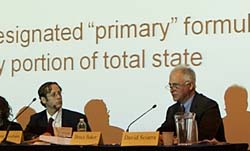