In an event in Milbank Chapel, TC's Charles Basch will be joined by Matt Yale, aide to U.S. Education Secretary Duncan, and Howell Wechsler of the U.S. Centers for Disease Control. Or to register for the Webcast, visit www.tc.edu/webcast. Download the full text of Basch's study "Healthier Students Are Better Learners". A set of Summary PowerPoint Slides provides an overview of key statistical findings in the study. 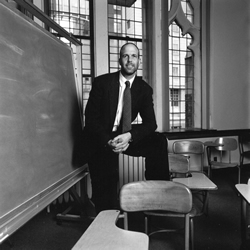