Chuck Basch is on a quest to improve the health of the nation's schoolchildren. 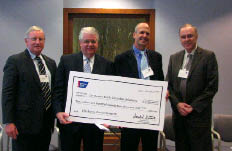