Helping the Best Get Better

Four former TC Cahn Fellow principals describe the challenges they've faced in transforming their schools into some of New York City's best -- and the program's founder explains his vision. One of them - Lily Woo, pictured at left, is the focus of a chapter in the recently published book Leading Outside the Lines, by Jon R. Katzenbach and Zia Khan. Leading Outside the Lines, Chaper Seven 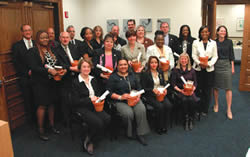