A collaboration that ranges from nutrition surveys to bullying prevention. 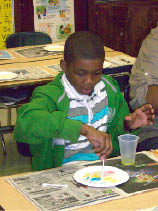