TC is first school of education to host the National Conference of State Legislators Annual Event
Kevin Dougherty
, associate professor of higher education at TC, spoke about performance-based funding, which links state funding of higher education to institutional performance indicators such as course completion, degree completion, or the number of low-income and minority graduates—a pressing issue for states having to slash education budgets.
On Friday, March 12, participants in the NCSL conference visited in upper to meet with leaders and graduates of the , a professional training program run by the City’s Department of Education for principals at some of the City’s most challenging public schools.
On Sunday at the Sheraton New York hotel, the group heard a discussion by former U.S. Assistant Secretary of Education Diane Ravitch and Deborah Meier, known as the founder of the small schools movement, who together write the Education Week blog, Bridging Differences. Their discussion was moderated by Richard Lee Colvin, director of TC’s Hechinger Institute on Education and the Media.
State legislators clearly came to the conference hungry for research-based ideas on education reform. Lena Taylor, an attorney and state senator from , said she was very interested in any education program, policy model or legal strategy that could be used to improve schools in her city. She was particularly interested in Wells’ presentation on school choice and voucher programs and Rebell’s assessment of educational equity. , where she grew up and went through public schools, has not met Annual Yearly Progress standards in six of the seven years in which NCLB rules have been applied.
Nearly a quarter of ’s students receive vouchers, which most use for private school tuition, said. The city’s graduation rates are low, and 33 to 35 percent of students have learning deficiencies. “The national average is ten percent,” said. “We’ve got a mess in , and we’re going to have to do something that is going to get us to a different place.”
Sobel, reacting to Basch’s discussion of the connection between health problems and school performance, said the weekend provided confirmation that her work on education issues in was the right thing to do. “To me, a lot of problems can be solved with education, not litigation,” she said. “Education and communication are my priorities.”
Sobel said she benefits from her graduate degree in special education from TC, even now, when she is no longer in the classroom. Her background as a teacher helped her get elected against two male attorneys in . “People trust teachers more than lawyers,” she said. “As she I knocked on 4,000 doors during the campaign, you say you’re a teacher, and they say, ‘come on in.’” 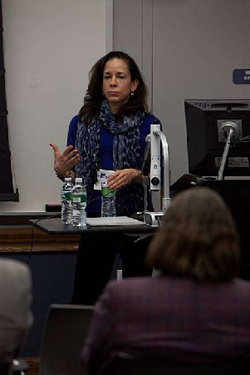 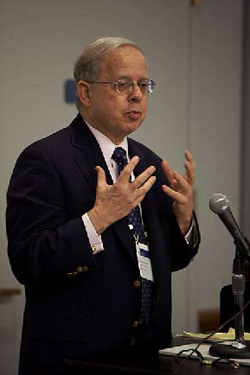 NCSL event with Michael Rebell, Director of the Collegeâ€™s Campaign for Educational Equity 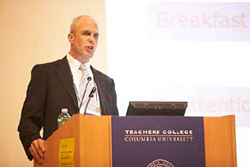 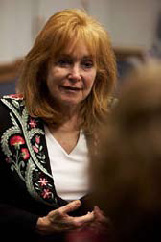 NCSL event with Eleanor Sobel, a TC alumna who is now a state legislator in Hollywood, Florida 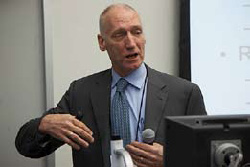 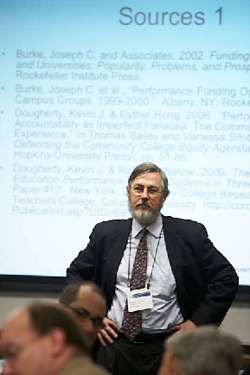