Learning that's Real, Even When the Environment Isn't

Comprehension, memory and motivation can all improve when you engage in a little role-play — or when your Second Life avatar does 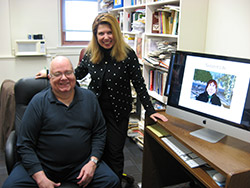