At Teachers College's Convocation for doctoral degree recipients yesterday at the Cathedral of St. John the Divine, TC Medal recipient Lee Sing Kong addressed the need to move education into the 21st century through the use of technology and a better understanding of how people learn. 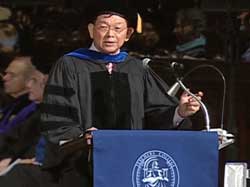