Language — and not only words, but the way people use them — was the focus for a global community of scholars who gathered at TC this past fall. 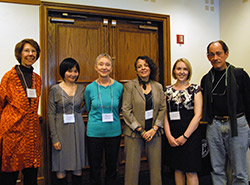